In the recent lecture at the Computer Science programme, we’ve discussed the way projects should be designed. There are three very important criteria: Coupling, Cohesion and Responsibility driven design. We might question the use of encapsulation, avoidance of code duplication and writing very specialized classes. Some might argue that once we’ve solved a particular task in a limited amount of time, it’s possible to move on and solve other tasks. However, based on my experience from Mathos Project mainly, I can conclude that if the code would be written that way, the project would have collapsed. The reason is, in particular in open source projects, is that it’s not as strictly decided which team writes and maintains a particular module. One developer might contribute with a specific functionality, and another with a different functionality in the same module. Then, we might get a different set of people trying to understand what they’ve done to build on top of it. Even the authors of the code might not be able to understand or “dare to modify” their own code. This phenomena can be referred to as legacy code. In conclusion, we don’t want that to happen!

For some weeks ago, I received a copy of NDepend (Developer edition and Build machine edition) from Patrick Smacchia, the Lead Developer of NDepend. This made me very happy and I started to test it on my current projects. In this article, I am going to explore some of the functionality available in NDepend. Please note that I am just describing features that came first in to my sight. NDepend is a very advanced system and contains a lot more functionality than I’ve mentioned here. Many specialized books have referred to the system and it’s also recommended by for instance Jeffrey Richter (I’ve referred to one of his works in this article) and Scott Hanselman. (For a more complete tutorial, please see this Pluralsight course)

Once I installed NDepend and test-launched it, I was able to generate a comprehensive report without reading any documentation. It’s a friendly GUI that suggests you what you can do at any point during the code analysis.

Even if it might appear as if it’s so much new information that has to be interpreted, there is a Get Started feature built-in to the report (top, right corner). It suggests that we should look out for unwanted dependencies, look for complex methods, etc. Personally, the first thing that fell into my sight is the percentage of comments in the project. Recently, Mathos Project promoted the idea to write xml comments to each new method as it is implemented. Since all analysis are saved regularly, I could have generated a report before the first post about the xml comment idea and compared it to the recent report. The percentage would tell me if we are moving the right direction. This is good not only from a developer point of view, but a also from a project manager stand point.

It’s always good to quantify big things into something that can easily be interpreted. NDepend provides you with many kinds of graph by default, but it is also possible to specify your own parameters. Let’s look at the simplest Component Dependency graph below: 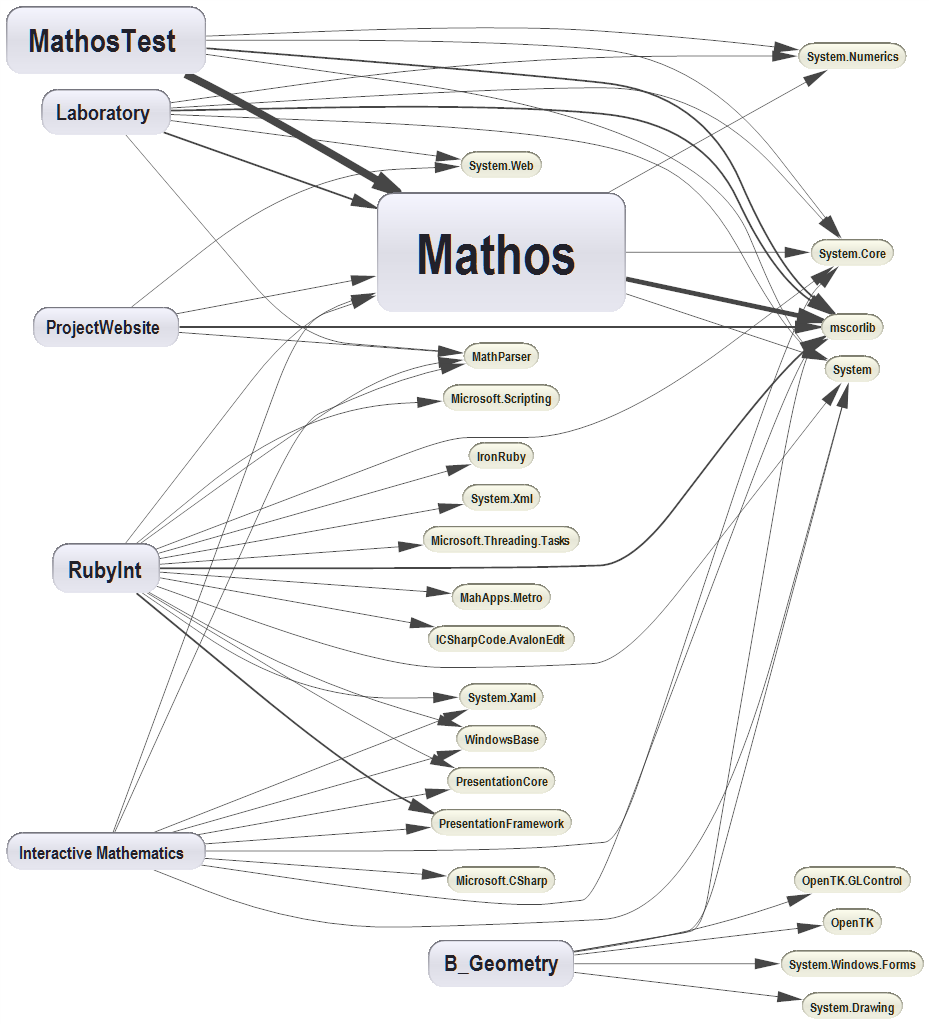 Visual Studio Ultimate allows you to generate similar graphs, but in NDepend more information is encoded into the  graph. For instance, the number of dependencies is proportional to the size of a project in the diagram. If you open this diagram in NDepend, you will be able to get more information by hovering a box. An example is show below 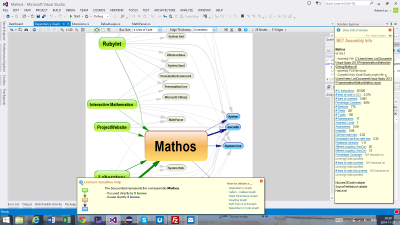 This is quite good if you want to spot strongly coupled classes. The thicker arrow, the more depended is a class on another class. Moreover, if a more complex analysis should be performed, we can look at code metrics. I am going to analyse complexity in terms of lines of code, but this can adjusted. 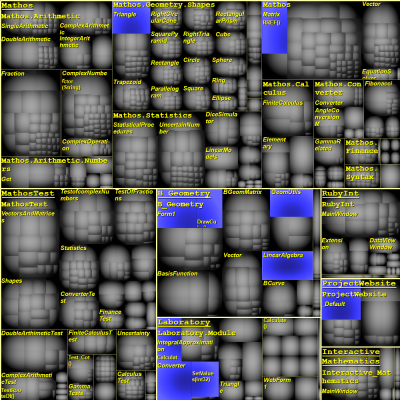 Code metrics. Generated with the NDepend plug in in Visual Studio.

Each of these small rectangles represents a method, where the area is proportional to the lines of code that method (we can change this to another property). The rectangles selected in blue are top ten methods that either have too many variables, parameters, or lines of code (read more here). If you spot a method that you want to inspect, simply double click on it and you will be redirected directly into your project where the method is located. This is quite good if we want to spot high or low cohesion. There is a tendency that the simpler a method/class is, the more specialized is the class at a particular task.

In addition to the diagrams I’ve already shown above, one that I really liked (partly because of the simplicity) is the Abstractness vs. Instability graphs. I’ve compared one for Mathos Core Library and Mathos Parser. 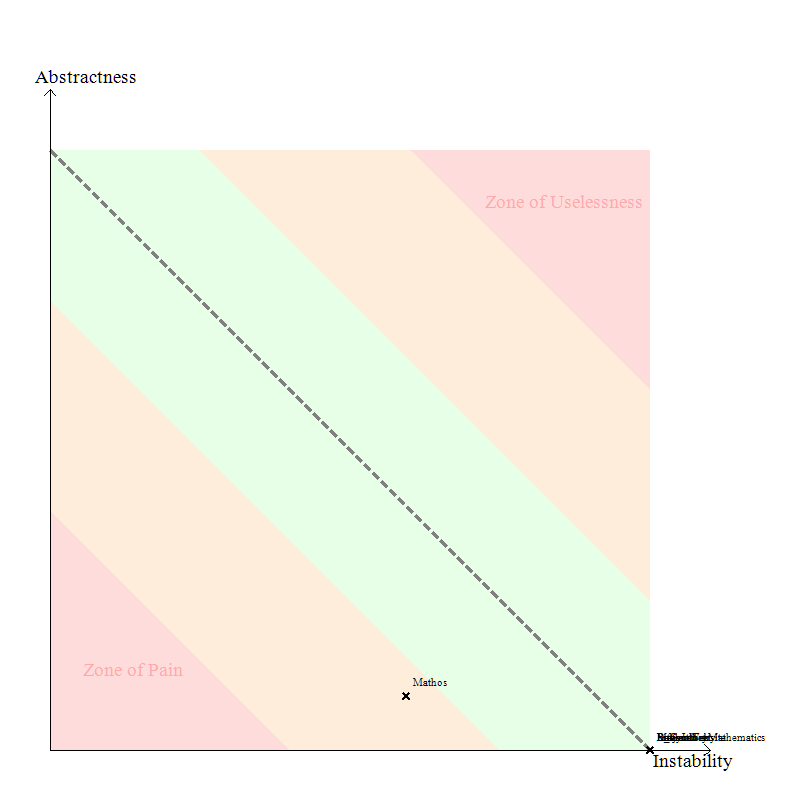 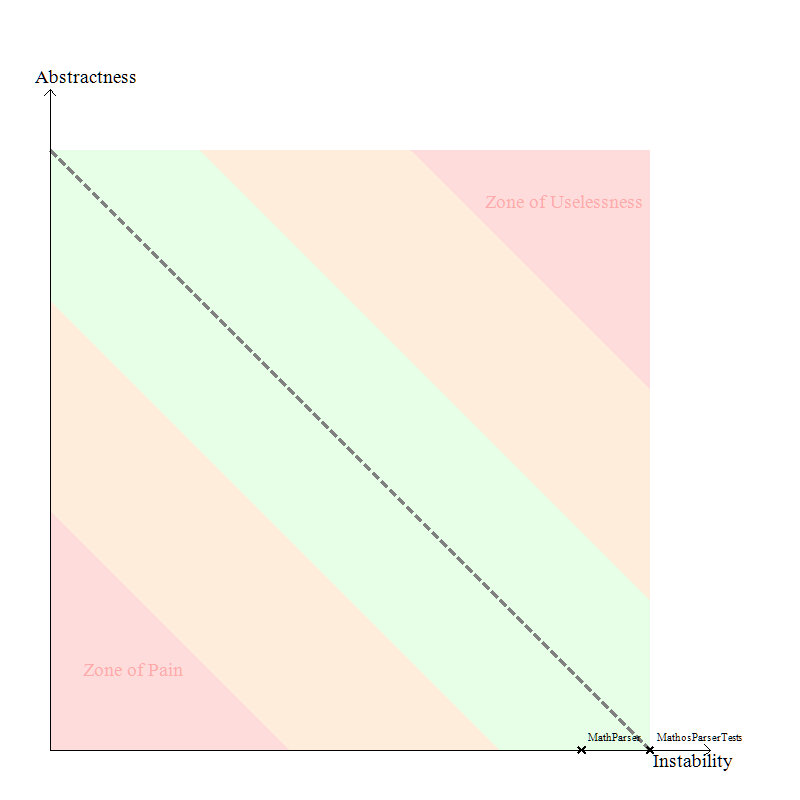 Note, Instability is a good thing since Stable means “painful to modify” according to the definition. It seems like Mathos Parser is in the safe zone and Mathos Core Library is close to it.

An example of this functionality is shown below: 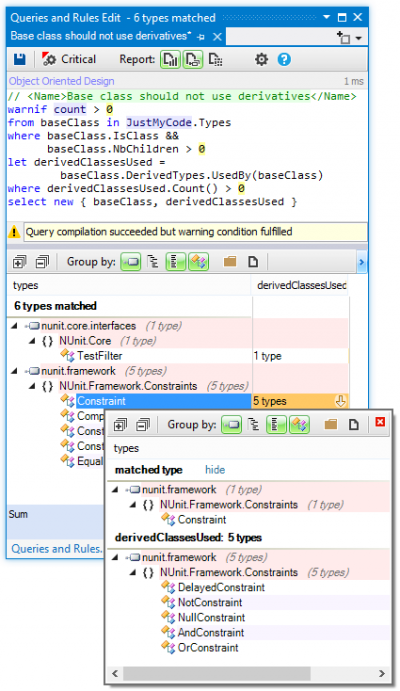 Based on my experience with NDepend, I strongly recommend this system to developers working on projects, particularly large-scale projects. Even if you are not using .NET, I believe it’s a good idea to get some basic knowledge of it. Some weeks ago, the .NET team at Microsoft announced that the .NET Core is going to be open source, which in my opinion will make the .NET framework even more influential in environments like Linux, Mac etc. On your .NET journey, I am quite convinced that NDepend will help you to make good design decisions easier and thus make your project not only good at performing tasks, but also a pleasure to read for new developers!